“They are a right pair of 80’s spunks, aren’t they.’
Collette Jane Davis
Aged 37 years and 1 day
Ubud

We are watching action, comedy, crime-bonanza, ‘Tango and Cash’. It stars the incredibly watchable, Sylvester ‘Rocky-is-a-pussy’ Stallone and the cheeky mulleteer, Kurt Russell. What have I been doing all my life? How have I never seen this? The soundtrack is astounding. And, Sly and Kurt are not the only eye-candy either: Teri Hatcher is an 80’s, lycra, mega-hottie. Late-80’s boobs are the best. In support of this claim I also cite Patrick Swayze’s sexual pinnacle, Roadhouse, another boob-laden, cinematic masterpiece released the same year.

It’s the blissful, spacious, lazy day after we shared a couple of bottles of Indonesian sauvignon blanc to celebrate Collette’s official shift into the countdown to four-zero. I’ve been telling everyone we meet that she’s fifty-two and everyone says she looks great. I concur. Especially in her, “I HEART BALI’ slips. Mwah! It seems the perfect time to reflect on our first two weeks here in Ubud.

We arrive in Bali in anticipation of looking after poodles Mini, Bunny and Bella as a Workaway.com experience in exchange for looking after a lady’s villa while she gallivants to the US for a month. Sherin meets us. She has a full peacock dress with a rip, showing her arse.  She has ginormous, bulging, fake juggies, like a photo finish in a Zeppelin race. They are not at all late-80’s. They are acting as emergency air-bags for everyone in the café, lest a ghost volcano (we’ll talk about this later) should suddenly erupt. The smallest and aptly-named poodle, Mini, is arching and rubbing her vagina desperately on Sherin’s naked shin for the entirety of my shakshuka, like some mop-headed whore-for-a-rock from New Jack City. Her general demeanour arouses a trickle of alarm and some questions need answering. This is just the first sign of something which just gets more weird and eventually the alarms start gushing everywhere.

She’s hard work. It appears that she isn’t really after dog-sitters. She wants an entourage. Some people to hang around her and justify her strange flappings. There is a string of intensely-peculiar incidents that make me feel like Channel 4’s, Martin Bashir. Here’s a small highlight reel. And believe me, there is no shortage of additional material here. This is literally a snippet!

She corners us into staying the night.

She confesses to sleeping in the same bed as two dogs, a meerkat, a duck, a lion cub and a baboon. All at the same time.

We accompany her on a food-market-date with Yogi-Derek, who ignores me blatantly and absolutely. He actually just walks away from me and doesn’t respond when I ask him questions. But just me. He seems medicated in some way. Maybe the bottle’s side effects include, increased level of twat towards lanky idiots.

We weigh her dogs and hold them while they are injected with blood flavouring before the fat one, Bunny, vomits in the vet’s reception.

We are about to pull the plug on the arrangement due to the discovery that Sherin has placed a bag of used tampons on the roof of her neighbour’s Hindu temple, when all of a sudden, she pretends that she isn’t going to the US anymore and cancels our month-old plans a full three hours before we move in for a month. Maybe she realised at the last minute that her Indonesian-fake-cakes weren’t safe at altitude and she’s having to re-juggle.  Pffff!

So, we have rented a sumptuous apartment for a month that is open down one whole side to an elevated view out of Ubud, across a diversity of dense, greenery and a spattering of spacious, bamboo-built homes. The pink sun rises at six through the veiled, shimmer of the gnat-net that drapes from the ceiling surrounding our four-poster bed. Bamboo tree-tips shift with the breeze across the balcony where I write, their flicked-italic-stroke-leaves are back-lit to reveal yet more artistry, within which, the finicky Java sparrows dip and hop. Above my head, a lizard in the light-fitting keeps sticking its fucking reptile-arse out of the side to shit on my keyboard from height.

By Monkey Forest, with all the scooters, Aussies, beer, vests, market-traders and hullabaloo, it’s just too busy for an old man like me. So the place we’ve rented is out of town by our new favourite café, the Yellow Flower. I wake routinely now at 4am with a sense of anticipation of the day and eager to see whether the ghost volcano will appear. Yes, ghost volcano. Believe this or believe-it-not, there is a huge volcano that dominates the skyline at whim in the first hours of light. Can you imagine my disbelief at this discovery? It’s six a.m. It’s my first morning sitting to write and I’m two-hours in. I look to my right from the desk and there’s a fucking volcano. A massive volcano. And it’s right in the middle of our vista. It’s far bigger than Sherin’s space-hoppers and the fact that I have not seen it AT ALL in the three days prior, despite spending literally hours per day admiring the wonderful view, is just unfathomable. I kid you not, this is a ghost volcano. Ghost. Volcano. Eat your hearts out, Ed and Elaine Warren. And I haven’t had any Goat Heidrun Udder Mead since Pai.

The climate here is perfect. Just five-hundred miles from the equator, you might expect Bali to be roasting, but the ghost volcanoes seem to attract weather. The clouds breeze over the sky and intermittently shield the sun so it’s incredibly changeable. It has felt like a good British summer and its possible that this is one of the reasons why there is a certain, mystical familiarity about the island. 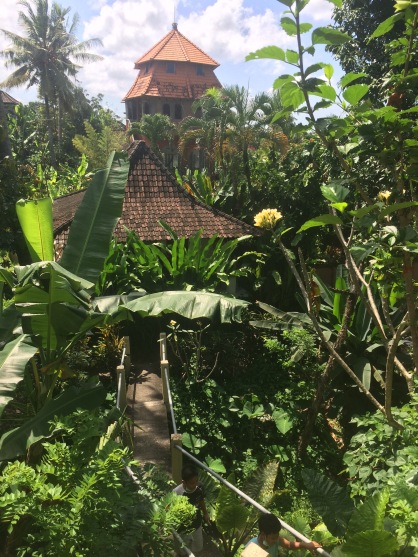 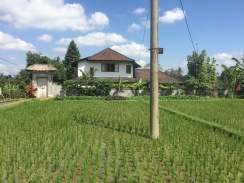 ‘My Tao Te Ching’ is a, ‘Fools Guide To Effing The Ineffable’. It a translation of Lao Tzu’s ancient Dao De Jing as interpreted by Francis Briers. His intention is to allow his own meaning (and therefore his own humourous take) to be extracted. The result is a new, lighter, funnier translation of the Dao De Jing than anything I have previously engaged with. The easy-to-digest wisdom is a perfect tool to research dialogue for my screenplay character, Denny Pilchards. Denny is a recently retired top-flight English footballer. A legendary striker for Mulchester Rovers. Denny acts as the enlightened catalyst for our repressed vicar, who is compelled by Denny to pull on his football boots to manage a rough, local, Sunday league football team, after delivering the funeral of their old manager.

We are now at beat 10, where according to Save The Cat, the bad guys are closing in. Our vicar has had his fake-high, where he makes a tactical decision to bring himself on, scores an exact re-enactment of Maradonna’s Hand Of God, then celebrates with a tone-perfect rendition of Puccini’s Nessun Dorma at DJ Mickey Bubble’s karaoke bar later. But the bad guys close in. Church prude, Margaret sees him leaving Angels strip joint. Neil from arch-rivals The Nag’s Head taps-up star-striker, Wayne and Miss Meadows is about to say something that will make our hero’s life much more complicated before it gets any better in the confessional. Let’s hope our hero, Vicar Robert (or Bobby) can get through the challenging next few scenes before the Netherton and Boundaries Cup final.

It’s day one of the next 365 days of loving Collette. After a tough ride through Singapore, where I faced an emotional and psychological lull due to big-city-fear, the demands of having nothing and heading nowhere on this tiny blue spec in space, I am now firmly back on track for world domination by next January. We highlighted this renewal yesterday with a celebratory 37th Birthday-trip to a swanky, bamboo and copper statue events venue called Akasha, where we played out and met Germans. Germans who both revered and utterly despised China in equal measure. It was a fitting way to mark a special day for the real 80’s spunk around here. Happy Birthday, babe. Don’t forget that this wannabe 80’s spunk is 36 on the second of October. 😉 If you’re reading this, I’ll have a hard-copy of The Hero’s Journey by Joseph Cambell. Cough cough. 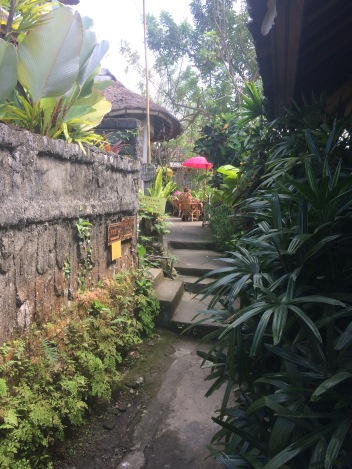 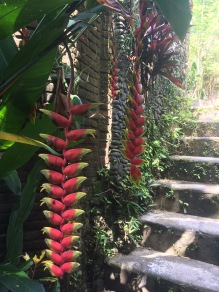 That you for reading
Pete

More of my notes on Sherin, here: Workaway

If you’re interested in the music we were listening to at Akasha yesterday, then Collette has Shazam’d some stuff that turns out to be by The Riddler.

I made Colette’s a surprise Birthday video. It’s on Facebook, here.