A trip up a hill in Pai.

There’s a hill. Just beyond the monstrous and sopping, elephants cock. Take a scooter. Go up it.  The hill.  It’s signposted for the waterfall but don’t get your hopes up. Through the rice paddies. Keep going. There’s a bamboo bridge over the bulgy river and the people that are leaving this place as we arrive don’t give anything away.

Arriving up the clay path at the other side, it was clear that Tim Burton had constructed these huts for his school play, using odd things he’d accumulated from other people’s huts after a flood and without using a spirit level.  Whilst blindfolded. With rum.  I conducted a perimeter check with Arnold for clues of dead tourists. There were a few too many pairs of sun-glasses hung up in the bar but that’s not proof of anything. Carelessness? We took a Leo in search of 60 baht answers.

My imitation of the mating call of an equatorial bird sends the furiously-delightful-looking, toothless, semi-naked, Thai guitarist, Beer, into a kooky stupor.  He eventually crawls, sweating and hunched from his hammock to sing Creep and tell me that he loves me, man. This wasn’t the answer either me or Arnold were looking for. In fact, Arnold left, bemused, before any of the real answers eventuated.

“Welcome to paradise.’ Giggled Lor. I believed him. Somewhat. But the desperate toilets at the back of that bedroom were testimony to an underlying malaise with no place in utopia. And Spanish Laura had made baffling life choices. People are sleeping at odd times. There is a fust. Where did Chung come from? Do people really come here? More importantly, do people leave? What is going on, here? And where the fuck is the waterfall?

Thankfully, Sully looked just like Colette’s cousin.  And he’s cool. Bryant and Cat were friendly faces too and great people. They’d been here before. And they weren’t dead. We started to relax a little. To the point where, when I eventually spotted the machete, I assumed it was just used for opening rambutans.

At the rock treadles, I keep my weight predominantly on my left leg. I use my right leg with a practiced dexterity to depress the ‘more’ rock, which markedly alters the size of the jungle. Certainly the lower lying foliage. The upper trees in the ridge by the clouds might even decrease in size slightly but it’s unclear if that’s due to the new comparison with the larger, lower trees. I digress. When I show the Irish kid with the broken nose how it works, his mind blows and it’s the end of his night. He leaves his girlfriend to wonder the possibilities of not being a mormon. I don’t think they’ll last.

It’s not clear if I’m supposed to be here or not. I suspect somehow that I should be here as my Mum’s here. Although she’s male, Argentinean, mute and patting her/his nipples around a stainless steel lattice that forms the nucleus of this entire operation.   Maybe I should speak to her/him? When I finally do he/she sucks me in to a surely, intentional and funneling, mane vortex which poses more questions than it solved. The mystery looks set to continue. 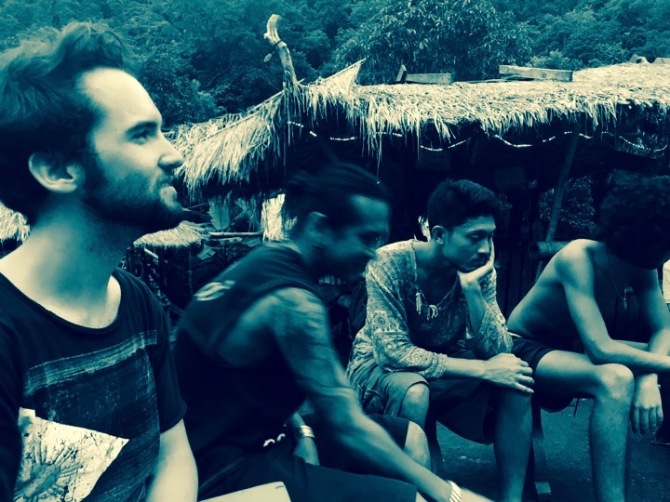 Sully, Collette and I had established that it could be possible to bind corn grits to my scrotum and then push my grained-balls through the meshing of the chicken pen. Tempted as I was, I decided it was safer to simply piss exactly equidistant from the frogs, the chickens and the swarm of fireflies. I’ll just have to make sure that my trigonometry doesn’t confuse the feral, jungle dog. It was whilst relieving myself here that I realized someone had managed to sneak inexplicably loud didgeridoo lamentations onto the playlist. I think we’ll need a new DJ if we ever make it to the ever-calling LED lights of club Bang Bang. Although, neither Leonardo DiCaprio, nor the small-armed, Belgian, Quentin Tarantino know what time the 192 actually leaves.

I turn to my left.

Mmm. I raise an eyebrow. What else can you do?

In Norse mythology, Valhalla is the ‘hall of the fallen’, where Odin houses the dead who he deems worthy of dwelling with him. In Pai, it’s same same. But different. 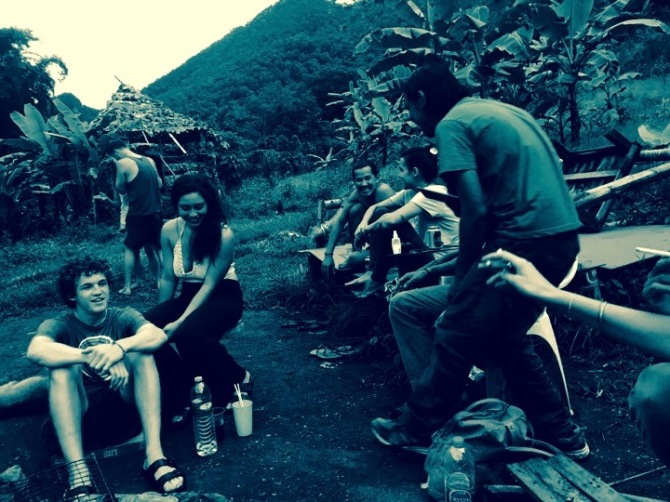 Thank you incredibly much for reading.