What phrase have I re-spurted over and over, most incessantly and Tourette-like, over the last two months? It’s a toss up. It’s either, ‘Radiantly Alive’, the centre where Collette has been bending and meditating religiously in Ubud. Or it’s ‘Gado-gado’.

These Collette-weary phrases offer a telling insight to our recent experience of travel in Indonesia. Collette does yoga all the time and I eat all the time. But what is Gado-gado?

We are first introduced to Gado-gado by Agung. This isn’t another mushroom essay, Agung’s a helpful, hamster-faced taxi driver named after the volcano. He grabs us from Denpesar airport and takes us to Ubud. Agung loves Gado-gado. Good lad.

‘What should we be eating in Indonesia, Agung?’

‘Gado-gado. You must try it.’ He says in his impossible, drilling accent from the front of his pleather-lined Suzuki family cruiser, ‘Yyyyeeeeeeeessssssss.’ 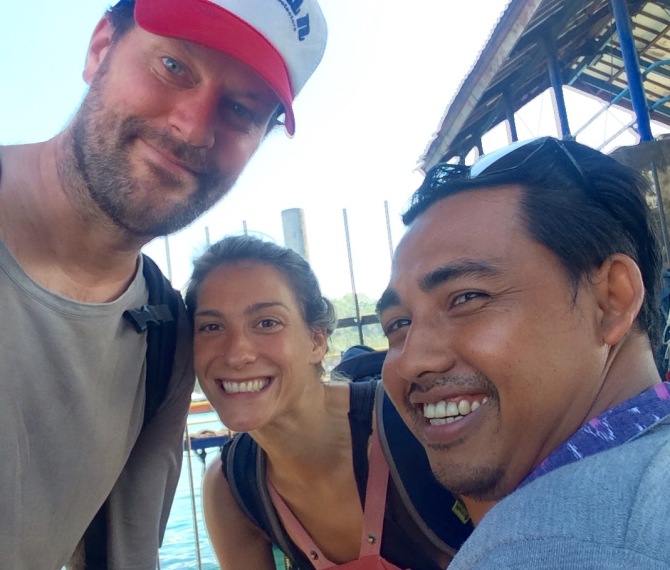 It concerns me the amount of Western crap that gets eaten here. Why would you come to this wonderful, abundant dreamland of nature and eat a fucking battered, chicken-derived-slurry patty on a processed sugar-bun with Hellman’s and a Coke Zero? You’re an idiot. Get some real, local fresh food and a coconut. They are hanging in the sun from the tree above your head. What’s your problem?

Gado-Gado is the Indonesian dish. It’s the staple. It’s on every menu. If it isn’t on the menu there’s something wrong with the place you’re in. Leave. Now. It’s fresh. It’s nutritious. It’s local. It’s half the price of everything else. Twenty Gado-gado’s later, I’m a Gado-gado aficionado.

To loosely summarise, it’s a plate of veg with peanut sauce and rice. It can be boiled veg, or salad-i-fied veg, or a mix. It doesn’t sound world-beating does it? And sometimes it’s not to be fair. If you just get the basic, peasant-end Gado-gado with boiled carrot, cabbage, potato and green beans, it can be pretty wank. Yet, still more nutritious than frozen, re-deep fried, chicken slurry.

But when a Gado-gado is prepared with love, and when some of the optional and regional Gado-gado special bits are included, Gado-gado can leap-frog all else on the menu to rightly assert itself as the Indonesian food boss. In King Gado-gado we trust. Stay calm and eat Gado-gado.

So what are the special bits that elevate Gado-gado peasantry, to Gado-gado royalty?

A good, fresh, peanut sauce
Simply, peanuts wet roasted in coconut oil, garlic, chilli, palm sugar, salt, soy sauce and lime. Peanuts grow on the island of Lombok and they take the half-hour, crystal-water crossing on wooden long-boats. Accompanied, like. Although it would be awesome if peanuts were mariners. We learned how to make the perfect peanut sauce on Gili Air at a cookery class. Fancy. 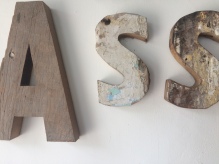 Sprouted mung beans
They’re very cheap and incredibly easy to sprout. Especially in the equatorial heat. They offer crunch and they aerate the food in your mouth, to enhance the flavour as you masticate furiously at your table without shame.

Tempe
A dense, bio-cultured (moldy), soybean block. Like a tangy, nut cheese. You can grill it, fry it, marinate it or poke it up your bum. It’s a good protein bonus on your Gado-gado.

Rice crackers or soy crackers
Extra crunch and good for scooping up excess peanut sauce. Though, this is sometimes used as a bit of a cop-out to fill your plate up. I’m onto this. Careful Mr tight-arse Gado-gado-maker!

Boiled egg
It’s a nice touch. All plonky-down, squidgy and oval shaped and all that.

Tofu
It’s rare you’ll get tempe and tofu on the same Gado-gado. If you get both, someone has a total Gado-gado hard-on here. They may even be a Gado-gado aficionado, like me.

Fried garlic
A little golden garlic on the rice portion is a pungent treat. Right up my Gado-gado street. The sweetness goes down a bomb right in my peanut sauce. On my Gado-gado.

Pesor
Pressed, wet, cold, dense, rice cakes. Over-boiled rice, re-formed into a small patty. These are surprisingly satisfying and also good to dip in the peanut sauce. Locals are well impressed when you know what pesor is. It adds to the general allure and mystique of a true Gado-gado aficionado.

Cucumber and salad
Crunch, hydration and nutrients. Ooh, yes please. All around my Gado-gado. 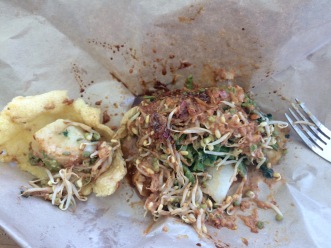 Now, at the start of this essay, it wasn’t clear to me whether or not I’d repeated ‘Radiantly Alive’ or ‘Gado-gado’ with greater frequency and thus most annoyance to Col. The winner is now clear. It’s Gado-gado all the way. We have a couple more weeks in Indonesia yet, so I have more time to drum it in for her. Gado-gado.

‘Luckily’, she says, ‘you’ll always be handsome.’ I wonder if she’ll feel the same when I’m fat because I’ve not been to Radiantly Alive for ages and I’ve been eating too much Gado-gado.

These two beauties are called Nur and Mul. Nurmal for short, if they were on Gili’s Got Talent as a two-piece. Here they are whacking up a take-away Gad-gado-for-two in Gili Trawangan, just by some chickens, an old bicycle, a wandering man and some dusty breeze blocks. They were impressed by my Gado-gado aficianodo-dom. I could tell. Mul (right) whacked up a peanut sauce right in-front of me on her massive pestle. It wasn’t Lombok-hot. She toned it down for my Western pallette. It was the shizzle.

Thanks for reading (i know this is for the most-part, nonsense)
Pete

One thought on “Stay calm and be a Gado-gado aficionado”